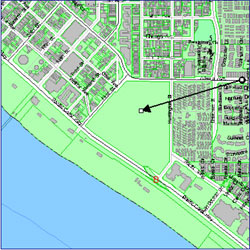 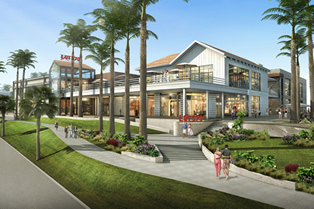 Summary: In September 2013, the commercial portion of the mixed-use development was amended with modifications including: redesigning the site plan, floor plans, and elevations of the approved 191,100 sq. ft. development, changing the square footage mix of retail, office and restaurant uses, separating the subterranean parking garage from the hotel, relocating the public pedestrian easement, removing angled street parking on Pacific View Avenue and providing at grade parking, and increasing the size of the parcel. 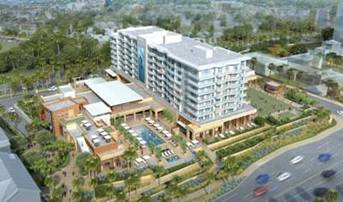 Summary: The proposed project is a request to amend existing plans for the hotel portion of the mixed-use development. The proposed modifications are to amend the site plans, floor plans, and elevations for the mixed development by redesigning the visitor-serving hotel development including relocating and expanding the service driveway along Huntington Street, redesigning the site layout and elevations, providing approximately 18% valet tandem parking spaces, and special permit for electrical transformers located within the street side yard setback. The hotel will consist of 250-rooms, 8-stories, 5,800 sq. ft. restaurant, meeting and banquet rooms, and spa and fitness facilities.

Summary: The proposed modifications to the 17.23 acre residential portion of the Pacific City development include redesigning the cluster building layou 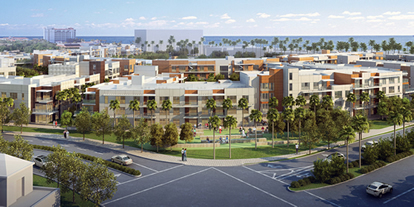 t, relocating the driveway entrances off Huntington Street and the inner loop road, adding an Emergency Vehicle Access driveway from Huntington Street, removing one driveway entrance from the loop road, redesigning the layout of the two levels of subterranean parking, and a parking variance for a reduction in total parking space requirements.  Changes to the elevations, building colors, and materials consist of amending the project design to a contemporary coastal aesthetic similar to the commercial and hotel architecture of the mixed use development.  Although the original project was approved as condominiums, the applicant intends to lease the units as apartments at this time.  Overall, the original count of 516 multi-family units remain the same.


Solar power is noise pollution free. It has no moving parts, and does not require any additional fuel, other than sunlight, to produce power.  Learn more about solar.