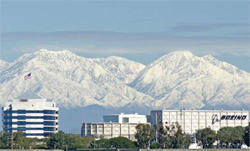 Huntington Beach contains a major installment of one of the state’s largest employers, Boeing, formerly McDonnell-Douglas.  A number of installments on the Boeing campus were originally constructed to service the Apollo Program, most notably the production of the S-IVB upper stage for the Saturn IB and Saturn V rockets, and some nearby telephone poles are still marked “Apollo Dedicated Mission Control Line.”

The second largest employer in Huntington Beach, clothing manufacturer Quicksilver, also has its world-wide corporate headquarters within the city.

Due to its abundance of beaches; sunny, warm Mediterranean climate; local surfing; and casual lifestyle, Huntington Beach has emerged as a perfect vacation experience for both young and old.   With miles of uninterrupted, pristine beaches along the Pacific Ocean, ideal weather, a welcoming attitude, and a wide variety of entertainment options, Huntington Beach plays host to an annual visitor population of more than 11 million people, with the greatest attendance during summer, special events, and weekends.

Boasting a comfortable climate throughout the year with a temperature that rarely gets above 90 degrees and seldom sees rainfall, visitors can take part in the many outdoor activities and special events Huntington Beach offers.

Beyond the beach, the City of Huntington Beach boasts top-class restaurants, shopping, hotels, resorts, spas and a thriving downtown district.  The downtown district includes an active art center, an eclectic shopping district, and the International Surfing Museum.  Downtown was also once the home of the famous music club “The Golden Bear,” which hosted the likes of Jimi Hendrix and Frank Sinatra.  Visitors can also find the Surfing Hall of Fame and the Surfing Walk of Fame downtown.

The city is centrally located to all major attractions in Orange County.  In Anaheim, tourists can visit the Disney Resorts, Honda Center, home of the Anaheim Ducks hockey team, and Angels Stadium, home to the Los Angeles Angels of Anaheim baseball team.  In Long Beach, tourists can visit the historic Queen Mary and the Aquarium of the Pacific.   Sea World and the San Diego Zoo and Wild Animal Park are located in San Diego.  Los Angeles is located 35 miles to the northwest and San Diego is 95 miles to the southeast. Huntington Beach is also conveniently located near three airports: John Wayne/Orange County (SNA), Long Beach (LGB), and Los Angeles International Airport (LAX).

Huntington Beach considers its beaches as a valuable natural resource.  Construction of any kind on the beach is prohibited without a vote of the people, allowing Huntington Beach to retain its natural tie to the ocean.

Huntington Beach sits above a large natural salt dome containing oil.  Although the oil is mostly depleted, extraction continues at a slow rate, and still provides significant local income.  There are only two off-shore extraction facilities left, however, and the day is not far off when oil production in the city will cease and tourism will replace it as the primary revenue source for resident industry.