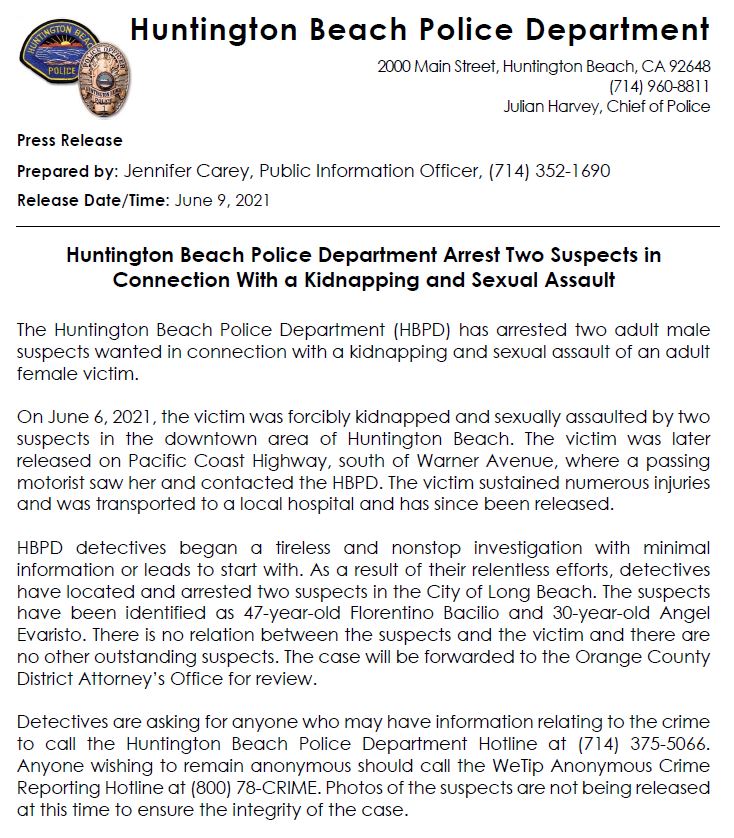 The Huntington Beach Police Department (HBPD) has arrested two adult male
suspects wanted in connection with a kidnapping and sexual assault of an adult
female victim.
On June 6, 2021, the victim was forcibly kidnapped and sexually assaulted by two
suspects in the downtown area of Huntington Beach. The victim was later
released on Pacific Coast Highway, south of Warner Avenue, where a passing
motorist saw her and contacted the HBPD. The victim sustained numerous injuries
and was transported to a local hospital and has since been released.
HBPD detectives began a tireless and nonstop investigation with minimal
information or leads to start with. As a result of their relentless efforts, detectives
have located and arrested two suspects in the City of Long Beach. The suspects
have been identified as 47-year-old Florentino Bacilio and 30-year-old Angel
Evaristo. There is no relation between the suspects and the victim and there are
no other outstanding suspects. The case will be forwarded to the Orange County
District Attorney’s Office for review.
Detectives are asking for anyone who may have information relating to the crime
to call the Huntington Beach Police Department Hotline at (714) 375-5066.
Anyone wishing to remain anonymous should call the WeTip Anonymous Crime
Reporting Hotline at (800) 78-CRIME. Photos of the suspects are not being released
at this time to ensure the integrity of the case.