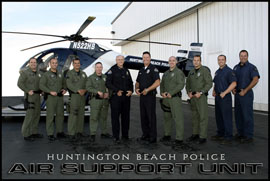 The Huntington Beach Police Department Air Support Unit provides support to ground based units engaged in all facets of law enforcement while, serving the citizens of Huntington Beach. This support includes, but is not limited to Patrol and Traffic Operations, Surveillance, Marine Safety and Fire protection operations, Aerial Photography, Search and Rescue, and Training. Additionally, the Air Support Unit may provide air support to other law enforcement agencies within the scope of mutual aid during life-threatening and emergency situations. We operate three MD 520N series turbine powered helicopters out of our facility. It is owned and operated solely by the city of Huntington Beach expressly for police and fire operations.  The Air Support Unit currently provides support under contract for the City of Newport Beach and the City of Costa Mesa.

The warning to would be lawbreakers; "This City Patrolled by Aircraft" is no joke. In the past 12 months the aircrews responded to over 5,500 calls for service. Of those they were responsible for 229 felony arrests. The air crews were able to cancel ground units over 600 times keeping them available to handle higher priority calls. They also handled over 330 DUI calls and handled hundreds of additional suspected DUI investigations. They also responded to approximately 900 suspicious activity calls.

The Huntington Beach Police Air Support Unit was formed in 1968. We were the first city in Orange County and the fifth in the entire nation to utilize helicopters in support of public safety. The Hangar Facility, currently in use by the Air Support Unit, was opened in 1986. It was named the Bob Morrison Heliport in honor of the founder and original unit commander, Lt. Bob Morrison. 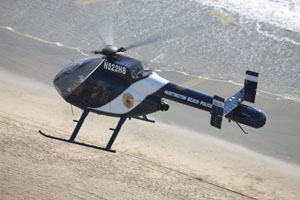 The Air Support Unit is organized in the Police Department under the Uniform Division, Traffic/Aero Bureau. It is commanded by the Traffic/Aero lieutenant and supervised by one Air Support sergeant. We currently have 4 pilots who work varying shifts to provide air support 7-days a week and 2 full-time mechanics that provide ongoing maintenance on our helicopters.

The primary goal of the Huntington Beach Police Department Air Support Unit is to provide a level of service that contributes to the overall success of the mission at hand. We understand safety is critical to the successful outcome of any mission, so we strive to operate in as safe a manner as possible in all areas of our aviation operations. 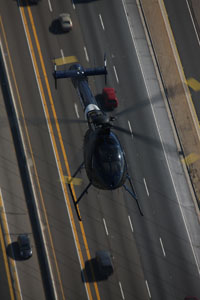 The greatest benefit of helicopter patrol is the quick response time to emergencies. Our helicopter is capable of speeds up to 175mph, which puts us first on the scene of a crime or emergency about 97% of the time. Once the helicopter has arrived at the scene, suspects usually cease their activity because of their immediate desire to hide or escape. However, there is no escape from the Huntington Beach helicopter.

The highly trained observers may be able to spot illegal activity from up to a mile away by utilizing stabilized binoculars or other specialized equipment. The ability to scan large areas increases the chances of halting crime and of apprehending suspects.

All of the pilots and observers are sworn police officers before their assignment to the Air Support Unit. They have excellent knowledge of the geographical layout of the city and are aware of high crime areas. While on patrol they are on constant look out for criminal activity including traffic violations and drunk drivers.

Our helicopters are equipped with "state of the art" communication equipment. We are able to talk to any police, fire, or public safety agency with our radios, increasing our effectiveness. 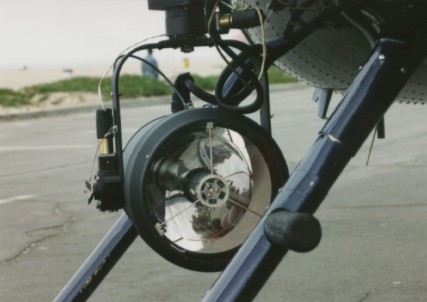 The helicopters we operate are equipped with "Night Sun" spotlights that produce 50 million candle power. The lights can illuminate large, football field size areas or may be focused to concentrate on an area a few feet in diameter.


We also utilize "FLIR", Forward Looking Infrared. This equipment detects heat and gives the observer an image on a small monitor that lets him see in total darkness. The images are remarkably clear. It can even show where a car was parked moments before, even though the car has left.

The FLIR is of great assistance in searching for criminal activity but it is also used to locate injured people on the beach or in the water at night. We have used it to locate boats in distress and even to detect fuel spills in the marina.

With the FLIR, we can scan school yards, check business roof tops, spot suspicious vehicles in neighborhoods, and pick out suspects hiding just about anywhere. One example of was the apprehension of a suspect who had been hiding under a trash can. His body heat warmed the trash container and he was picked out from all the yards being searched, even though he was not visible to officers conducting the search.

With the helicopter's special equipment and experienced flight crews, the air unit can search an area for suspects in minutes. The same area without air assistance might take ground officers hours to fully search. The helicopter also responds to calls such as traffic jams, speeding cars, suspicious persons or vehicles and other minor incidents. If the problem is gone, ground units can be canceled to handle other, more important calls that may be waiting.

The helicopter responds to all major incidents. Whether a vehicle pursuit, a robbery in progress, a major traffic collision, a structure fire, or a boat in distress, the aircrew's job is to assist ground personnel and watch out for everyone's safety.


With the unique ability to see all sides of a situation at once, the helicopter can report to ground units any dangers that may await them around a corner.


The helicopter crews can direct the appropriate response to citizens or other officers who need help. They can set up containment perimeters, do aerial surveillance for fires, assist in criminal or narcotics investigations, and respond to water rescues. 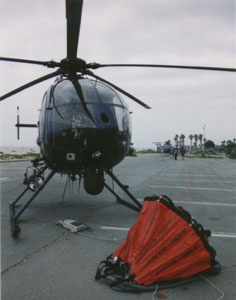 The pilots who fly our helicopter train constantly to be as proficient and safe as possible. Pilots train with SWAT, Firefighters, and Marine Safety personnel to be prepared for any emergency. By FAA regulation, pilots receive intense examination and flight reviews to check their proficiency. Each pilot is a licensed Commercial Pilot and an experienced police officer.

Our aircraft patrol during daylight hours at or above 700 feet. During night patrol we increase our altitude to 800 feet or more. This gives us the best visibility while reducing noise. We may fly lower if an emergency situation requires and have even landed to assist citizens or officers on the ground.

In 1984 we began using the MD500E model helicopter for patrol, it was equipped with the "Quiet Knight" package, a four bladed tail rotor (tail rotors make the majority of the helicopter noise). In 1992 we put our first NOTAR (No-Tailrotor) in service and the second NOTAR in 1998. These helicopters are the latest technology and were designed to be 30% quieter than tail rotor models. We became an all "NOTAR" fleet in 2002 with the addition of our third NOTAR helicopter. NOISE, is usually our only complaint, except by the criminals we catch, and we are sensitive to that concern. We will try to keep the noise down and are sorry for any inconvenience. 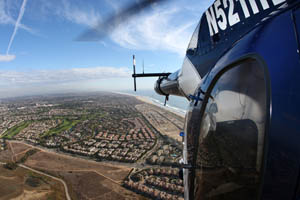 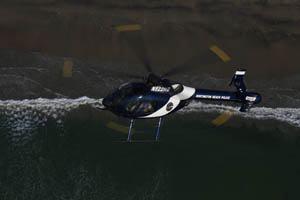 
Solar panels are virtually maintenance free since the batteries require no water or other regular service and will last for years. Once solar panels are installed there are no recurring costs.  Learn more about solar.