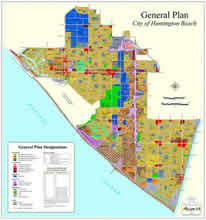 and adopt a comprehensive, long-term General Plan for its future development.  State law permits cities to include optional elements in their General Plans, beyond the seven mandated elements, thereby providing local governments with the flexibility to address the specific needs and unique character of their jurisdiction.

The General Plan is the fundamental policy document of the City of Huntington Beach.  It provides the framework for management and utilization of the City’s physical, economic and human resources.   By providing a basis for rational decision-making, this document guides civic decisions regarding land use, the design and/or character of buildings and open spaces, the conservation of existing housing and the provision of new dwelling units, the provisions of supporting infrastructure and public services, the protection of environmental resources, the allocation of fiscal resources, and the protection of residents from natural and human-caused hazards.

The General Plan acts to clarify and articulate the City’s intentions with respect to the rights and expectations of the public, property owners, and prospective investors and business interests.  Through the Plan, the City informs these groups of the community's goals, objectives and policies thereby communicating the expectations and responsibilities of all sectors in fulfilling the General Plan.  In addition to the written goals and policies, the General Plan contains a Land Use Plan that is the prevailing determinate of land use in the City.  The Zoning Maps and development standards function to implement the General Plan.

The City’s General Plan consists of 9 elements listed below. On October 2, 2017, the City Council adopted a comprehensive update to the General Plan. The following 6 elements were adopted as part of the General Plan Update: Land Use, Circulation, Environmental Resources and Conservation, Natural and Environmental Hazards, Noise, and Public Services and Infrastructure. Three existing elements (Housing, Coastal, and Historic and Cultural Resources) were not included in the Update. Links to each of the current adopted General Plan are provided below.  The date of the most recent comprehensive update of the element is shown in parentheses, with the date of the most recent amendment, if any, also provided.


Planning Commission meetings are held on the 2nd and 4th Tuesdays of each month. Meeting Agendas, Action Agendas, and Minutes are available to view online.